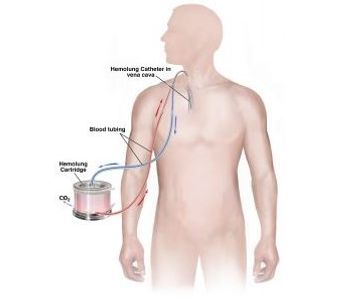 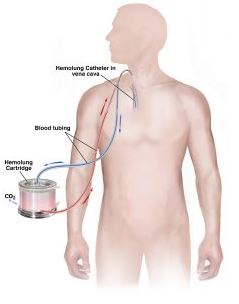 Extracorporeal carbon dioxide removal (ECCO2R) provides an alternative or supplement to mechanical ventilation by removing carbon dioxide directly from the blood using techniques similar to kidney dialysis. The procedure can be performed as part of comprehensive treatment for acute respiratory failure in the intensive care unit.

COPD affects 30 million Americans and is the third leading cause of death in the United States behind cancer and heart disease. Acute exacerbations, defined as a sudden worsening of COPD symptoms, are a major cause of morbidity and mortality in COPD patients. For patients with severe exacerbations, high levels of carbon dioxide can result in respiratory failure and the need for intubation and mechanical ventilation as life saving measures. Unfortunately, mechanical ventilation is associated with many side effects, and in-hospital mortality remains as high as 30%. ECCO2R therapy with the Hemolung RAS allows carbon dioxide to be removed from the blood independently of the lungs with the aim of facilitating the avoidance or reduction of intubation and invasive mechanical ventilation.

The global incidence of acute respiratory failure exceeds 1 million cases per year. Many patients with respiratory failure require the assistance of a ventilator to provide life sustaining oxygenation and carbon dioxide removal. Unfortunately, the injured lung is susceptible to additional damage by the positive pressure exerted by the ventilator, leading to additional injury, complications, and increased mortality.

Reducing ventilator pressures has been one of the most important interventions shown to improve outcomes in these critically ill patients. Use of these lung-protective ventilation strategies in which the ventilator is “turned down” can lead to a critical accumulation of carbon dioxide in the blood. ECCO2R allows carbon dioxide to be removed from the blood independently of the failing lungs with an extracorporeal device in a manner similar to kidney dialysis, thus enabling implementation of safer mechanical ventilation settings.