Chinese scientists working for Sichuan Revotek have successfully 3-D printed blood vessels and implanted them in rhesus monkeys, the company said.
It is a major step on the road to mass printing human organs for transplants.
The company is 'the first to have maintained the viability of the cells with the 3-D printing technology,' said James Kang, chief scientist and CEO of Sichuan Revotek.
Producing 'bio-ink'
The key to the experiment's success was the biological material developed by Sichuan Revotek, known as bio-ink, which is made from stem cells derived from the fat tissue of monkeys.
Stem cells have the ability to grow into any cells within the body, and the use of the monkey's own stem cells means the vessels won't be rejected by its immune systems once implanted.
Patented as 'Biosynsphere,' the bio-ink consists of stem cells in a micro-environment of growth factors and nutrients that can stimulate the cells to grow into the types of cells needed to form a functioning blood vessel.
The use of stem cells acquired from fat tissue is also safer than the usual source -- embryos, Kang said.
How it works 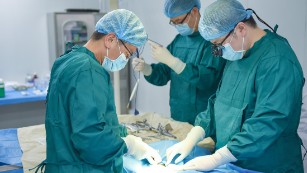 The technology could one day be used in humans.
During the surgery, Kang's team replaced a 2-centimeter segment of abdominal artery with a 3-D printed blood vessel in 30 rhesus monkeys.
Within five days of implantation, the stem cells were able to grow into the various types of cells needed to make a functioning blood vessel, including endothelial cells and smooth muscle cells.
One month later, the grafted vessels had completely merged into the monkey's own artery and functioned 'exactly the same' as the monkey's original vessel, the company said.
The printed vessels have been shown to support vascular functions, such as aiding blood flow and transporting nutrients throughout the body as the bio-ink helps them fully develop into living vessels, Kang said.
'And the bio-ink's capacity to develop collagen, a necessity for the tissue to mold into different shapes, is the first of its kind,' he said.
Other experts agree the work is groundbreaking. 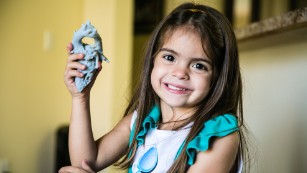 How a 3-D-printer changed a 4-year-old's heart and life
'This is an important breakthrough in the field,' said Alex Lee, an assistant professor at the Chinese University of Hong Kong, where his team has been using 3-D printing to prototype heart models to personalize cardiac surgeries for patients.
However, Lee said it would require years to observe the long-term effect of these vessels and cautioned that they 'may become blocked again years later.'
Kang said the company was applying for regulatory approval to test the process on humans.
Last year, Sichuan Revotek created the world's first blood vessel bio-printer, which is said to be able to produce living tissue and organs. The privately owned company is one of a number of tech start-ups in China's rising innovation hub in the Sichuan capital of Chengdu, offering great hope for the field to progress.
Sichuan Revotek has also produced the world's first 3D blood vessel bio-printer.
The long road to 3-D organs
Last year saw an explosion of attempts to produce 3-D printed biological structures.
Russian scientists transplanted a 3-D printed thyroid gland into a lab mouse in November and expect to print human organs in 15 years. French cosmetic giant L'Oreal announced that it is developing 3-D printed skin tissues for product testing. A New York start-up, EpiBone, is attempting to 3-D print customized bone grafts.
However, these advances have aroused some ethical concerns, and analysts say they're likely to spark major debate leading to regulation of the technology.
But Lee sees 3-D printed vessels as a real possibility for humans and expects to see them 'tested in clinical trials in a couple of years.' Other simple structures could also become a reality, she predicts.

No comments were found for Chinese company implants 3-D printed blood vessels into monkeys. Be the first to comment!