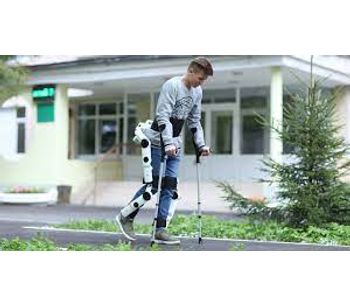 Exoskeleton as a medical rehabilitation aid

A medical exoskeleton is intended to help the health-challenged people. It is a dedicated biomechanical device for rehabilitation in case of lost or restricted mobility of limbs. Its operating concept is based on repeating the human motion biomechanics under proportional mitigation of the efforts required to make such. The patient independently controls the device via a smartphone app.

Subject to the patient’s condition severity, exoskeletons can be used for temporary or continuous wearing. These are intended for rehabilitation after a complex surgery or a blood stroke, or else for continuous wearing in case of locomotor system problems, inter alia for the elderly. The developers are seeking to obtain the most control-friendly, but fully functional and light mechanism, ensuring useful and comfortable use of the exoskeleton.

The teams of the world’s best scientists, doctors and IT professionals have been involved in exoskeleton creation. Nowadays, functional models have been put in place in Japan, Israel, USA, and Russia. However, the work in this domain was launched in Yugoslavia as far back as the 1970s. The local Institute of Automation and Telecommunications assembled the first prototype of a would-be exoskeleton. The device was thought to assist in rehabilitation of paralysed patients. The first exoskeleton was cumbersome and inconvenient, and its technical aspects required serious rework. The work in this field has continued for 40+ years. Technology advancement has enabled to create a more compact and high-performance gear for efficient rehabilitation of people with impaired mobility.

The crucial task now encountered by the developers is to create a multifunctional mechanism which would account for patients’ individual needs. Exoskeletons differ by size (large, medium, and small) and intended purpose (for upper and lower limbs). Such diversity enables to use them to solve a broad variety of health problems: in case of injured lower limbs, locomotor dysfunctions, in cerebral or complete paralysis. What really matters is that the device is practical, and affordable to patients: in some countries they are available as part of welfare aid or covered by medical insurance.

To date, exoskeleton has been unrivalled in the market of medical rehabilitation aids in case of locomotor dysfunction, due for 4 valid reasons.

First, the exoskeleton automatically repeats the natural pattern of human walking, which is helpful for more efficient patient rehabilitation after injuries, surgeries and serious diseases that cause partial loss of mobility.

Second, the exoskeleton enhances capabilities of people with impaired mobility: they are now able to take care of themselves, and even travel.

Third, the exoskeleton drastically improves the living quality of the elderly, whose capabilities were restricted as a consequence of lower limbs diseases or joint problems.

Finally, the verticalisation principle is a key feature of exoskeleton. Vertical (upright) position of the body helps all the systems work in convenient and, most importantly, proper conditions, which restores normal blood pressure and circulation. This makes impaired mobility patients rehabilitation more efficient than before.

No comments were found for Exoskeleton as a medical rehabilitation aid. Be the first to comment!