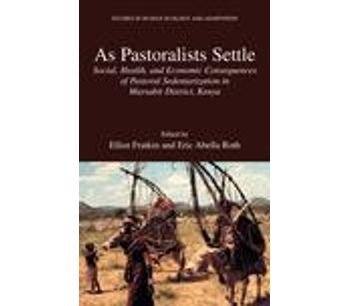 0
Share Share with Facebook Share with Tweeter Share with LinkedIn
Jan. 1, 1900
Throughout the world's arid regions, and particularly in northern and eastern Africa, formerly nomadic pastoralists are undergoing a transition to settled life. Pastoral sedentarization represents a response to multiple factors, including loss of livestock due to drought and famine, increased competition for range land due to growing populations, land privatization or appropriation for commercial farms, ranches, and tourist game parks, and to fear of increasing violence, ethnic conflict, and civil war. Although pastoral settlement is often encouraged by international development agencies and national governments as solutions to food insecurity, poor health care and problems of governance, the social, economic and health concomitants of sedentism are not inevitably beneficial. Biosocial studies presented in this volume, for example, point to greater nutritional and health benefits among nomadic livestock keepers, but increased opportunities in education, employment, and food security in towns. This book examines from an interdisciplinary perspective pastoral sedentarization in one region of Africa - Marsabit District in northern Kenya - an isolated and arid region bordering Ethiopia and which contains multiple pastoral groups including Rendille, Samburu, Ariaal, Borana and Gabra peoples. Within this locale, we present recent studies conducted by cultural and biological anthropologists, veterinary biologists, economists, geographers and medical and community health personnel, linked by the common goal of delineating the consequences, both positive and negative, of settlement for formerly nomadic pastoral populations. For many of these former pastoralists, settled life does not necessarily constitute a break with their pastoral kin and neighbors, but represents one more opportunity with which to survive in a difficult physical and social environment. This edited work is a collection of international contributors from North America, Africa and Europe and focuses on a...

More About This Publication »

Register here for the Springer e-mail newsletter providing you with information on the latest products in your field.

No comments were found for As Pastoralists Settle. Be the first to comment!